At this moment there is a discussion going on on the Optimism forum whether the Ooki protocol is eligible or not to receive a grant so we have sufficient liquidity available.

Please have a look at the OP forum here :

Why are we doing this proposal to receive a grant on the OP forum :

Until now the feedback on the Op forum has shown us that the OP community is expecting us to be matching the incentives Op will provide to us with the same size of incentives in Ooki tokens from our side.

With the current Ooki token price this comes down to the amount of around 87m Ooki tokens to match the 700k in OP tokens we have requested in the grant proposal.

Question is for the Ooki community, are we willing and are we able at this moment to match the incentives we are requesting for in the Op proposal ?

Please ventilate your thoughts, so if we need to put up a snapshot vote and an onchain vote we have an idea here on the forum if there is some kind of consensus from within our community.

OP community is expecting us to be matching the incentives Op will provide to us with the same size of incentives in Ooki tokens from our side.

I didn’t find that (but I’m not sure if I understood you right). Actually I didn’t see another proposal where they give tokens in compensation. In any case I think we shouldn’t do it, 87M Ooki are highly need it for us in this stage, maybe it could be a lot less (we are not Optimism), some proposals requested OP tokens for marketing and devs, and we only request it to incentive OP users (traders, borrowers and lenders) on the Ooki protocol (100% of the liquidity program) so this is very nice from us compare with others but maybe we can add some small amount for marketing next time.
I see they considered about Ooki proposal:

I see two “issues” that can undermine confidence in Ooki; OP chain is not deployed yet and Ooki PRO is not released (and I consider we should start every liquidity program after Ooki PRO to attract new users in the platform for good, maybe we can express this next time if you consider the same)

There is no strong usecase fundamentally which Ooki stands out from the rest. Taken from this example: 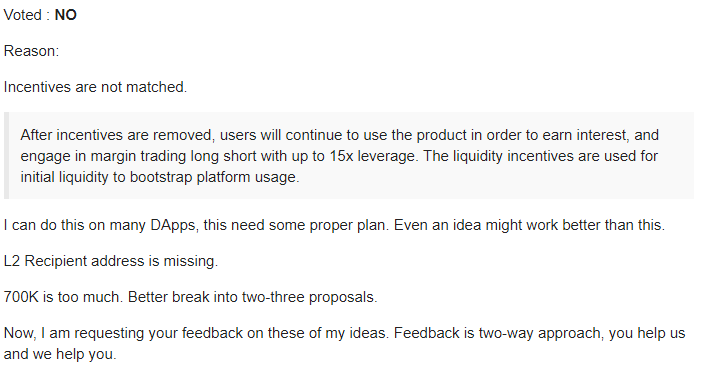 This phase 1 proposal to OP was already on thin basis. Having DAO to agree to shave off the treasury for this won’t make difference anymore. There is no need to push this further. As explained on this screen:

Phase 2 proposal might be an option if PRO is finished and PL is finished. That’s when the uniqueness can come in (unless some other project gets deployed and has those functions already). When the phase 2 will happen? Not sure. Probably in winter?

Bottom line: Too late to make a case. The OP-community has denied the proposal.

Additional info: Aave requested 300k OP and they had clear plan on what to do, plus they had DAO vote on how they would utilize the grant. They came very prepared.

We could propose on the OP forum to match their incentives 1 :10

So for every Ooki token we like to be granted with 10 OP tokens.

What are your thoughts Ooki community ? This way we have a clear final proposal on the table.

i would agree with a 1:10 option. but the distribution of the op tokens needs to be more detailed.

Propose 400 OP (57% of 700) with a rate 1:10 = ~5M Ooki tokens, making them understand the important of the treasury for us right now and the potencial of an union with Ooki in long term, crypto space is well-known for helping good projects to reach their goals, maybe they can see this if we respond about they requirements.

A extend explanation about why Ooki is/will be unique and not like any of the Phase0 proposals:

(Something better than I described, my level of expression is not high)

And the compromise that this liquidity program will be alive when Ooki PRO is alive to catch the most people and giving a tight estimate date for Ooki PRO release, give some serios answer to them as we did but with a bit more of everything.

Also in the same proposal add a 300k OP when PL is alive (it will be 700k OP but split in two parts), and with some very small part for marketing/promotion when the time comes

About matching incentives we can give something similar we did for Evmos, or something better if someone can:

If you think this make sense, this proposal should be polish, I could be wrong in the approach, or make it simpler and propose a 1:10 as It was said by @Frank

So what do you think? Any thoughts?

I think it is too late to convince them. A project with lack of outstanding features and products cannot get grants unless it’s compromised by matching the incentives.

Ooki is not even deployed on OP yet, that’s also another factor, yet a proposal was made.

To suggest a smaller volume of matching incentives would be appropriate if there was features that the Optimism community would be interested in. But doing this now, with their firm verdict would just make Ooki sound desperate.

Well, if we only answer their concerns and make a statement where we cannot reach similar liquidity explaining it, we only making them clear that they underestimate Ooki, I mean, probably they don’t know how it works or how it will work. I think their only fount of information about Ooki (because there are more proposals) is:

So we can give them a reply explain it and waiting for phase2 or giving a second path for an approval.
I also think is too late according with the voting snapshot: ~95% against:
OP voting: Ooki proposal

I think there are two options:

I really don’t understand why OOKI needs OP tokens in the first place.

therefore, the only functioning reason why OOKI needs OP tokens is for the community to short OP. I don’t think that should be the main objective.

Using OP as a method of distribution is weak since other projects can do the same and OOKI doesn’t have the functioning L2 TVLs of the AAVEs to be a needed player in the OP ecosystem.

Working with potential network partners -like API3- as laboriously suggested- to provide network effects is much more attractive.

Thanks for your question. Allow me to clarify why OOKI needs a OP liquidity grant to boostrap platform liquidity. Ooki is a decentralized margin trading and lending platform with multiple trading pairs including (eth/usdc, wbtc/usdc, etc). Ooki is seeking a grant to bootstrap liquidity on Ooki’s Optimism deployment across multiple trading pairs. The liquidity grant is used to bootstrap liquidity temporarily, by providing lenders additional rewards for lending their tokens (USDC, FRAX, ETH, WBTC, etc.) to borrowers who then borrow and pay interest to lenders.

Initially after launching, without any liquidity on the platform, traders will not be able to use Ooki to open margin long/short trades because there is nobody willing to lend out their tokens to prospective traders. Without initial bootstrap liquidity, there is no potential incentive for lenders to lend because there aren’t any traders.

The purpose of the initial liquidty grant is to bootstrap liquidity so that lenders will be incentivized to lend out their funds to traders. Then after liquidity is built up initially using OP liquidity grants, the OP rewards to incentivize lenders can be tapered off and removed and demand from margin traders borrowing to open margin long/short trades is sufficient to provide long term incentives to lenders. However without the initial liquidity, traders are unable to open trades.

“However without the initial liquidity, traders are unable to open trades.”

The beauty of OOKI is that the contracts don’t require liquidity to long a token. So people will be able to long tokens with no liquidity. If we want to allow people to short tokens, then asking for OP tokens makes sense because the protocol needs liquidity. IIRC most OOKI traders are on long rather than short. So I question whether OP liquidity is an actual prerequisite to having a successful trading platform on OP. (obviously, unless the logic of the contracts has been changed recently,)

rewards are tapered off and removed

I recall when tokens were given to incentivize liquidity in bzrx’s polygon and BSC. What ended up happening after the rewards were tapered off, was people dumped the token and exited with their liquidity. So, the same event will likely happen again. People farm, then leave.

Have you thought about POL (protocol owned liquidity)? Perhaps selling vesting ooki+OP at a discounted rate in exchange for actual ETH/USDC, etc could help this liquidity exit post rewards ending?