On September 22, 2022 the CFTC published on their website an announcement that a civil complaint was filed against Ooki DAO alleging Ooki DAO voting members violated provisions of the Commodities Exchange Act (CEA) in connection with developing a decentralized margin trading blockchain protocol and failing to utilize KYC for platform participation as required by CEA regulations.

This Ooki DAO forum post is geared towards beginning discussion among DAO community members as to the appropriate response to the CFTC complaint. Potential actions could include any of the following:

Based on the theory articulated in the CFTC complaint, all DAO token holders could be found liable for any alleged wrongdoing based on DAO voting participation. As a result of this, the outcome of the Ooki DAO CFTC case could serve as precedent for other DAO’s in the cryptocurrency space and have far reaching implications for the entire cryptocurrency space as it pertains to liability of DAO voting members.

Among DAO’s offering DeFi services such as trading, margin and lending Aave DAO, Compound DAO, Abracadabra DAO, Sushi DAO, Kyber DAO, Lido DAO, Uniswap DAO, Gitcoin DAO, and countless others would all be impacted by this litigation as the CFTC alleges that all DAO voting members are individually liable for voting in DAO’s. 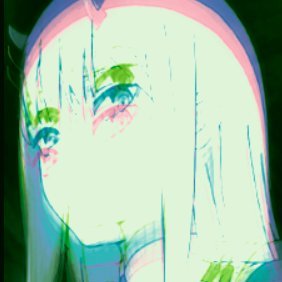 @z0r0zzz
Ok, so today the CFTC fined Ooki DAO and its members as an "unincorporated association" to tune of $250k — This is a very broad theory of liability ("joint and several") and confirms what crypto lawyers have suspected — cftc.gov/PressRoom/Pres… Let's untangle things: 🪡 https://t.co/zuGXoh2mmX 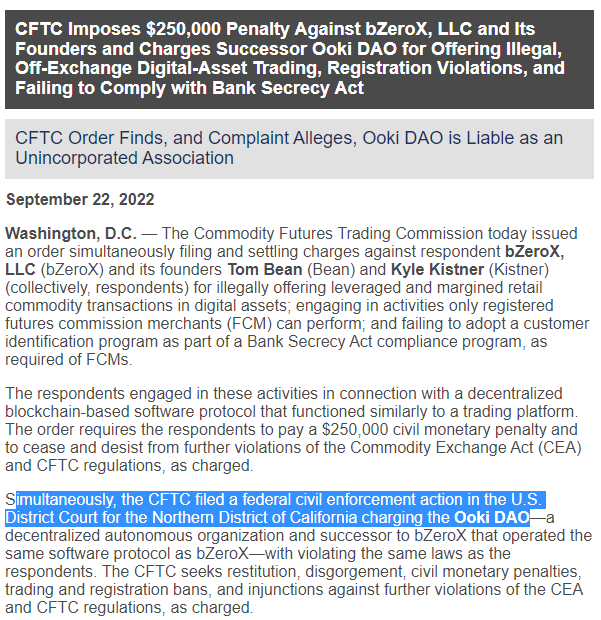 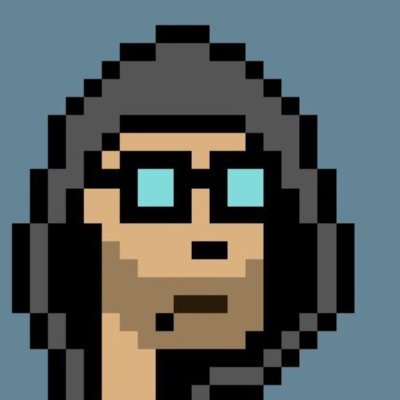 @punk6529
1/ The CFTC bZX/OoKi enforcement action is interesting because of the last paragraph, namely that the CFTC just looked through the DAO or "DAO" and said it is an unincorporated association and the individuals are responsible. cftc.gov/PressRoom/Pres… https://t.co/iXRVdKpLMR 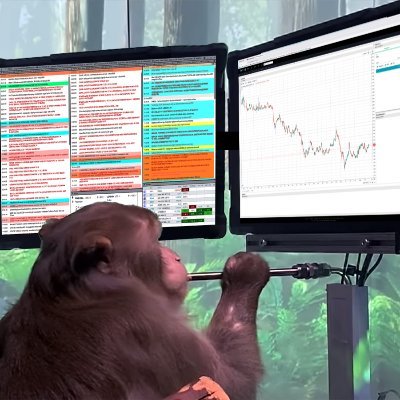 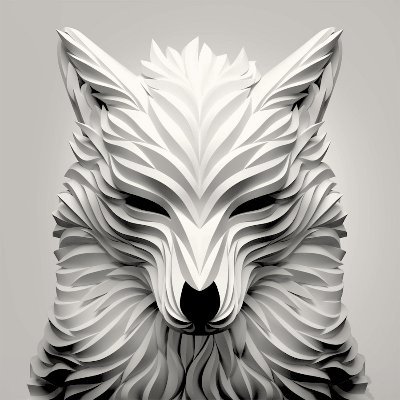 @HsakaTrades
a16z probably offering their legal team to Ooki to fight this one. No one is more incentivized than them to make sure this doesn't set some precedents. twitter.com/tier10k/status… 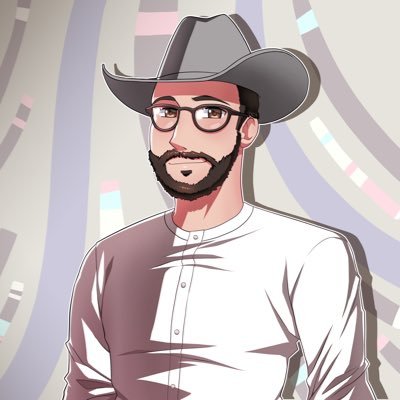 This concern was echoed in the CFTC’s dissent. Among CFTC chair members, there are also dissenting viewpoints of optimal paths forward in relation to DAO token holder liability. Some insight into this were provided in the recent dissenting statement of Commissioner Summer K. Mersinger:

“We cannot arbitrarily decide who is accountable for those violations based on an unsupported legal theory amounting to regulation by enforcement while federal and state policy is developing… I cannot agree with the Commission’s approach of determining liability for DAO token holders based on their participation in governance voting…Although there are no allegations of any fraud having occurred here, we all are mindful of the need to protect customers who are participating in the largely unregulated crypto space. But those good intentions do not entitle the Commission to act through enforcement without proper legal authority, notice, or public input.”

There is still time to help shape the future of DeFi regulation. Let’s come together and decide the next course of action.

My thoughts, we should do all of the above. All of it.

I also would like to reach out to the other DAO’s out there providing DeFi services such as trading, margin trading and lending like the DAO’s pointed out in the article above.

I think once we have structured our defenses, we definitely need to reach out to the other DeFi platforms to join forces.

They are targeting us now, the little guy, thats Ooki. But this is just the beginning, so lets do something about it, together.

I think the most important thing right now is publicity. lets get this link posted everywhere so that general crypto community get involved. Please post on twitter and tag relevant people.

Second I agree with all 4 points:

I am rasit from Analybits.xyz
We are a global blockchain legal services firm. I would like to offer legal support to the Dao.
We have very strong legal and blockchain experience, and we believe we can contribute a lot to legal incidents right now the dao face.
We can either can manage and build the DAO legal strategy or/also can prepare the defense or can prepare the legal expert witness report.
for a recent research, you can check (analybits.xyz/tornado)

Which other references do you and your team have?

Portfolio companies’ valuation is a couple of billion$. Due to respect, l don’t like exposing their name and how we contributed a lot since the disputes were handled privately. We assisted a lot of projects, from top 10 cmc to small caps. Some of them took our advice; some did not, and some did not take any legal advice at all.
For example, I have some concerns for the future of Ooki Dao too, but I don’t write here since third parties can consider a weak spot and take action against the dao if my worries are correct.

I think we should reach to Morrison Cohen, if I am not mistaken they help bZeroX to reach settlement and they most probably have the deepest knowledge of the case.

Morrison Cohen is an international law firm with attorneys specializing in all areas of law including international arbitration, real estate, mergers & acquisitions, and business law.

looks like this is him Jason P. Gottlieb | Morrison Cohen LLP

I agree with all of the above suggestions and will support all later ideas that try to help ooki in particular and defi in general.

Also, if there is a usdt or busd address created so that the community can easily transfer funds to support ooki that would be great. Many a little makes a mickle; Together we can change the world. I believe so.

Won’t it be a conflict of interest?
They helped one of the parties, and they settled. Do you know the details of the talks and settlement?